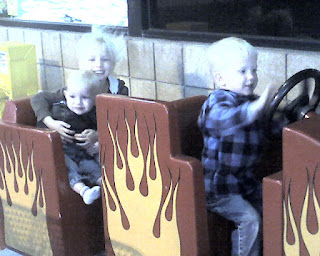 Posted by Podium quest at 7:42 PM No comments: Links to this post

Labels: my chilren, My daughter, my family, my son

Here's a couple pictures from the South West grappling championships where I took 4th in the masters no gi & 2nd place masters gi division. 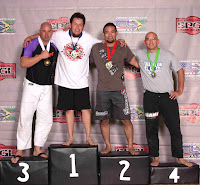 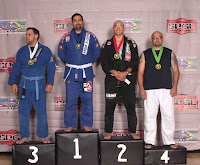 Posted by Podium quest at 5:24 PM No comments: Links to this post

Last week I was doing well getting back into triathlon training after taking a little under 7 weeks completely off. I'm not saying my training was high quality mind you, just that I seemed to be back in the swing of training again.

Monday morning I was scheduled for a bike ride. Nothing really difficult, a 90 minute ride with ten 60 second sprints with two minutes of active recovery in between. No matter how hard I tried I couldn't force myself to get on my bike.... So apparently the burnout continues.

I have the desire to train hard, I just don't want to do any swimming or biking at all. Which brings up another issue that has been lingering in the back of my head for awhile. For the last 18 months I've been wanting to get back into weight lifting. I've done a little triathlon sports specific strength training to increase the speed & power of my legs this last season, but that's not the kind of lifting I have the itch to do.

Back in 2000 I got into weight lifting pretty seriously. I got really good results. Apparently I have the genetics to pack on a bunch of size & strength relatively easy. For some reason I miss the weight training.

I'm wanting to spend some time hitting the weights & bulking up. I'm not giving up triathlon completely. I'll still compete in at least four 2011 South West Challenge series races as a Clydesdale, 4 being the minimum # of races an athlete can compete in and still be eligible in the SW challenge series competition. I'll still be forcing myself to do enough biking & running to be able to get through a sprint triathlon- notice I said "get through", I did not say I plan on doing enough training to do well at it. I know I'll struggle finishing triathlons next year because I won't be doing enough triathlon specific training to excel, but the biggest reason I will probably struggle is because muscle burns A LOT of oxygen! & if I plan on bulking up for awhile, the extra muscle will make it REALLY DIFFICULT to race hard in all the 3 disciplines of a triathlon. Good thing for me there were only a few serious Clydesdales competing in the South West Challenge Series 39 & under division last year. Perhaps I can still hope for a top 3 next year in the Clydesdale 39 & under. We'll see.

Today I started the first day of a 6 week phase of Anatomical Adaptation. This phase is designed to prepare the ligaments & tendons for putting on a bunch of size & strength quickly. The anatomical adaptation phase is the equivalent of a base building phase in triathlon, & can be just as uneventful & boring. I'll finish that phase in late November & then I'll start the hypertrophy phase, which is where all the muscle gets packed on! Perfect timing to be bulked up by spring time!
Posted by Podium quest at 6:06 AM No comments: Links to this post

I had a relatively easy week back to training after a little over 6 weeks off. By Thursday my legs were pretty tired even though the week's training wasn't very difficult. On Saturday I had an hour base run, & I was tired the tail end of it! After only an hour! An hour run was a short & easy day of training before I took my 6 weeks off. Looks like it's going to be awhile before I get my endurance & speed back.
Posted by Podium quest at 11:17 AM 2 comments: Links to this post

The end of the 2010 triathlon season & a Clydesdale once again

I made it through my 1st bought of triathlon burn out. I became tired of triathlon training & racing in July. I ended up taking a full 6 weeks off to rest, recover, & get re-motivated.

This last Monday I started training again & did my 1st bike ride in 6 weeks. My speed was almost as good, & my endurance also felt great. Tuesday I ran & felt just as good as I had on Monday! I was amazed that I felt so strong after I had taken so much time off. On Wednesday I had a brick consisting of an hour long bike then a 40 min run. Half way through the bike I felt exhausted. So apparently I had lost fitness after all. It just took a couple days of consecutive training to feel it.

Because of all the time off I took from both training & dieting I am technically a Clydesdale again, meaning I'm back above 200 pounds. I had stayed below 200 pounds for an entire year with my lowest weight being 184 pounds in early July. I'm working on getting below the 200 pound mark again. Although I love racing in the Clydesdale division, the 35-39 AG is filled with a bunch of super studs & having to compete against them kept me motivated all year long. I ended up winning the 2010 South West multisport Challenge Series 35-39 division! During the 2010 season I placed higher in multiple races than I ever dreamed I would. I placed top 10 overall 5 times, 4 of those were top 5, & one of those was 3rd overall! I also finished in 2nd place at the 2010 South West grappling championships masters Gi division & 4th place overall at the 2010 South West grappling Championships masters no-gi division in the month of October.

Although I'm to out of shape & weigh to much to do exceptionally well at the Silverman 70.3 I'm going to go & race it anyway. I wrote them & asked them to move my registration from 35-39 AG, to the Clydesdale 39 & under division. If I can take top 30% in the Clyde division I'll win a place at the 2011 ITU Long Distance Triathlon World Championships. If I win a spot to the long course championships, it will be held at the Pumpkinman triathlon in Henderson NV in October of 2011. If I place in the top 33% of the 2011 Pumpkinman triathlon I'll win a spot to the 2011 ITU Long course world championships held in November at Henderson NV at the Silverman 70.3 triathlon. That's would be my dream scenario. Out of almost 6 years of triathlon training & racing I've qualified 3 national championship triathlons & for 1 world championships race. Another of each would be oh so sweet!!

Posted by Podium quest at 8:23 PM No comments: Links to this post

I took 2nd place in the masters gi division at the South West grappling championships! 3 more divisions to compete in!
Posted by Podium quest at 1:01 PM No comments: Links to this post

Cutting weight for the graplling tournament

Since I'm going to compete in the grappling tournament tomorrow I decided I may as well partake in all of the festivities, leave nothing of this experience out. So I decided to cut weight to be able to register in the weight class below me. I'd never cut weight before, so this was a new experience. I started taking in less water & food last night at midnight. I put on a jacket and a couple layers of clothes a & ran stairs for around 20 minutes. This morning I was already really thirsty & hungry. By 11 am I had a headache & was beginning to feel a little foggy in the head. By 4 PM I had a stomach ache, headache, fatigue, my tongue swelled up a little, & I was confused. I got lost trying to find the Sprint store in Rio Rancho. I got lost again when I tried to drive to the Rio Rancho Defined fitness even though I've been there a thousand times. Surpassingly by then I was no longer hungry or thirsty. I sat in the sauna of the Defined Fitness for 10 minutes, then cooled off for 5 minutes or so. I did that for about 3 rotations. I ended up losing 12 pounds total.

So now I've weighed in, paid my fees & trying to rehydrate & refuel.

Anyone who knows me know I love punishment! I ended up registering for all of the 4 divisions I was eligible for.
- master gi
- masters no go
- adult gi
-adult no gi

I'll let my peeps know how I do tomorrow!!! Should be fun!!!

Posted by Podium quest at 6:43 PM No comments: Links to this post

In late August I became burned out with dieting & triathlon. I stopped training completely the 1st week of September, I also missed September's Patriot triathlon, which was going to be my last A race of the 2010 season.

I haven't worked out in almost 6 weeks. I've been concentrating on regaining my normal drive to train & my desire to compete. I feel better. I can't say I'm motivated to train again, but I know if I take any more time off then I'll have lost so much fitness & gained so much weight I'll spend the rest of this year & part of next trying to just get back to where I was.

I needed a motivator to get me back to training. I tried finding a big triathlon to attempt next year, that usually gets me excited. Didn't work. No race or training plan seemed to get me excited or motivated.

A couple weeks ago I found my motivation! I happened to find an advertisement in the paper for the SW grappling championships which will be held in Rio Ranch NM, just 45 minutes from my house! Before I fell in love with triathlon I trained in MMA for about a year & half. It's been almost 5 years since I've done any grappling, but regardless of how long it's been, I registered for all 4 of the events I'm eligible for:
-the masters no Gi
-Master Gi
-men's 195-215 pound Gi
-men's 195-215 pound no Gi.

It's a 2 loss elimination tournament, so even if I lose every match I'll be competing in 8 matches! If I get on a winning streak I'll be VERY VERY tired, but I'll be having fun & burning calories hand over fist!

In 2005 I went to the Arizona state grappling championships & took 2nd place in the absolute division. I'm not going into this tournament with any expectations of repeating that performance. Grappling is a skill just like any other, one that is lost when not used. So my only goal is to have fun.

Wish me luck, I'm going to need it!!! If I have cell phone reception where the tournaments are held I'll post on my blog how I did after every match.
Sent via Facebook Mobile

Posted by Podium quest at 6:39 AM No comments: Links to this post