I saw an endocrinologist this week. She believes my poor strength, inability to recover, weight gain, and fatigue has to do with me getting ran over by a car. She believes my pituitary gland was damaged. In addition to low testosterone I also had no detectable human growth hormone, my calcium has dropped significantly, etc. I'm having more tests done to see what we can do about it. Until we figure it out she requested I slow down or stop training altogether.
Posted by Podium quest at 11:58 AM 1 comment: Links to this post

I've noticed I'm not making gains or recovering like I used to..... No matter how much I try to lose weight I can't..... Seems the harder I work the weaker and fatter I get..... I get night horrible sweats to the point the bed is soaked..... i expect some of these due to age but not this much. I finally broke down and went to see my doctor. Turns out I have very low testosterone..... I'm not sure what to think about this yet. I'm almost relieved that I finally have an actual reason that I'm feeling like this. I have an appointment with an endocrinologist this week. I'll keep y'all updated as I find things out.
Posted by Podium quest at 5:09 PM 1 comment: Links to this post

I've had a Cannondale Slice for a long time. 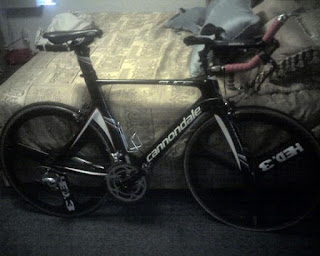 I put a lot of miles on it. Almost 12,000 miles. I'm very emotionally attached to this bike. I tried selling it on Craigslist. But when people came over to look at it I'd end up telling them I'd changed my mind.

This weekend my cousin came up from Lubbock Texas. He said if I was selling it he'd really like to buy it. I was so excited! He takes really great care of his bikes. This couldn't have worked out better. My beautiful bike has a good home.
Posted by Podium quest at 5:08 PM No comments: Links to this post

This week I've been training really hard. My legs are trashed. Last night I wasn't able to finish my clean and jerk workout. That rarely happens. I'm going to increase my calorie intake by 50 a day to see if that helps. This morning I woke up and my legs are still tired. But I'm going back to High Dessert Athletic Club this morning anyways. There was a period of time that I was struggling to decide if I wanted to be a weightlifter or a powerlifter. I tried powerlifting. I didn't like it. I have focus now. A focus I was missing before. I'm a weightlifter.
Posted by Podium quest at 11:17 AM No comments: Links to this post

This week has been a great week for weightlifting training, track training, and eating. During my taper for the state games I was missing working out so bad! This week I've thrown myself back into it hard. I seem to be making progress on eliminating the pause I have at the knee. I also have new motivation. My best buddy started dating a girl with a sad story. After her divorce she started working hard on losing weight. She's lost 120 pounds. Her feelings are hurt because her ex-husband only wanted her back after she lost the weight. And her ex-husband is hurt because he feels she was only willing to get in shape for other men, not him. I've always prided myself on being a selfless and doting husband. But that girl's story made me realize that me being overweight may cause problems in the way my wife sees and appreciates me. Me being kind, hard working, selfless and a good father for her children just  may not be enough.
Posted by Podium quest at 3:49 PM 1 comment: Links to this post

On May 31st, 7 days ago I finished paying off my father in law's funeral and our state tax bill. It took a few months of pounding out a lot of overtime. But it's finally paid off. I'm exhausted​ and ready to catch up on rest, but we're caught up with our finances.
I know I posted this a couple weeks ago. But here it is again. From 2007-2015 I worked 42,120 hours. That's 4,680 hours a year. An average person that works 40 hours a week works 2,080 hours a year. I averaged more than double that. Being put in a position that I was forced to work overtime for so long caused a lot of problems including but not limited to severe depression. I'd never struggled with depression before that. I'm really sick of overtime. I'm hoping this is the end of me having to hammer out overtime. It's doubtful. But I'm keeping my fingers crossed!
Posted by Podium quest at 2:02 PM No comments: Links to this post

Today I competed in the 2017 New Mexico games. This meet is the state championships for weightlifting. I'd won the last three years in my age group and weight class. This year I wasn't expecting to do very well. I was out for 6 months with a non-weightlifting related back injury. I've only been back to training for three and a half weeks.

When I first got there I was so happy. I saw all my current teammates, teammates from my former gym, and other weightlifting buddies I've made over the last 5 years. I love weightlifting so much. A lot of the reason is the people. The only person I didn't get to see who I was looking forward to seeing was David B from my old gym. He and I lifted at the same time the full 3.5 years I lifted in Santa Fe. I absolutely adore him and his wife. They're great people who I miss seeing and training with.

Pictured below is my former coach Shane Miller and my current coach Joaquin Chaves. I love both these guys so much. They are more than just friends and mentors. 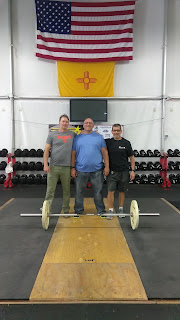 I also was lucky enough to be able to get a picture with my current coach, former coach, and my former nutrition coach Barry Schroeder. I'm going to have this picture framed and I'm going to hang it in with my families pictures. Barry was the one who was my motivation to get into weightlifting long ago and he took me under his wing and taught me about weightlifting specific nutrition. 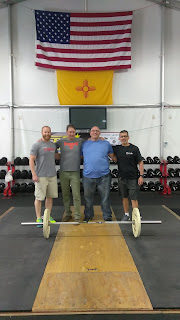 The last couple weeks I haven't been able to snatch anything more than 86k. I only made 84k two out of 7 attempts. Coach Joaquin Chaves told me he wanted to start out at 90k. I begged him to let me start at 74k. He told me he wanted me to start out at 84 at least. He said he knew I could get a 90 easy. Long story short, I made 3 good lifts for the snatch. 84/88/91. Even after 6 months away from weightlifting I was able to get within 9k of my lifetime best snatch of 100k. Coach Chavez was right. I made 91k easy. No problem at all. I need to trust him. He knows my ability more than I do. Anytime I ever doubt him I always find out he was right.

The clean and jerks felt great also. I made a 114k/117k and missed a 121. There was no reason at all for me to have missed the 121. I pulled it high enough. I just had that same pause at the knee that I usually do with my snatches.

I've noticed the last few weeks my strength has come back quickly. But it's taking me longer to recover between sets than it used to. I never told coach Chaves I wasn't recovering as quickly. I also never told him during the meet that to do well I'd need more time between lifts. But he knew. And after every set he'd change my weight two or three times to buy me extra recovery time. Thanks in large part to my coach I finished 1st in my age group and weight class. This was the fourth straight year I was state champion. But this time it was just plain luck. I was the only one in my division competing. 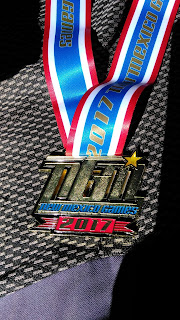 Now that I'm back into the weightlifting game my next goal is to qualify for the 2018 masters national weightlifting championships that will be held in Buffalo NY. I'll need a 230k total. That's only 22k more than my total today. That gives me plenty of time.

It's been 6.5 months since my last sports competition. That was the longest I'd gone without competing since 2004. I missed competition. My next sporting event is the New Mexico games track and field on June 24th. Its going to be held at Milne stadium in Albuquerque New Mexico. Thats within walking distance of my house!
Posted by Podium quest at 7:03 PM No comments: Links to this post