When I started training for triathlons I learned the best way to get fast is to lose weight. When I was overweight no matter how much and how hard I trained my fitness couldn't make up for the loss of speed because of the extra weight I carried. I've found out getting fat slows down a CrossFit athlete just as much. Not that long ago I'd gotten to the point that I was doing every WOD with the RX and finishing quickly. I was completing the WOD with a fast enough time that I was going to start adding more weight than the RX. But then I fell off the diet wagon and gained a crap load of weight. I'm was still working out consistently, but the weight gain has slowed me down much worse than I had imagined it could. I'm back to having to do each workout below the RX and finishing close to last every class. Dang it, body weight matters in CrossFit too.

"It is no disgrace to start all over. It is usually an opportunity. "George M. Adams

Posted by Podium quest at 12:51 AM 2 comments: Links to this post

I've been wanting to compete in the Angel Fire 50 kilometer trail run for a very long time. I signed up earlier this year expecting that the race would motivate me to start running again. It didn't. I doubt I've ran a total of 30 miles in the last 21 months and I'm tipping the scales at 250, so unfortunately I wont be running in the Angel Fire 50K. That's ok, the longer it takes me to earn an ultra endurance trail run belt buckle the more I'll appreciate it when I do. 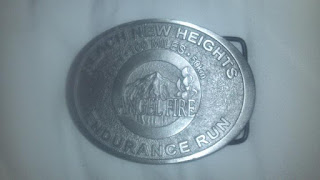 On a more personal note, I hadn't heard from my natural father since I was 13. A while back I found him and we rekindled our relationship. For a little over a year everything was beyond perfect. He went camping with my family, called me multiple times a week, and visited every few months. He was the father I'd always wanted him to be. It was wonderful feeling accepted by a parent, that's not something I've had much of in my life. Then just as suddenly as the last time, he disappeared. He turned his back on me while I was going through a really hard time. The timing wasn't his fault, but it still made things much more difficult for me to deal with. In that same month I'd ended my relationship with my mother. She has borderline personality disorder. Severing ties with my Mom hurt deeply even though it was best for both of us. That same month I found out my step 1st (of 3) step Dad who raised me from the age of 2 to age 15 had died. He was an alcoholic and he and my Mom had a horribly abusive relationship, but he was a great father to me. For years I desperately wanted to find him and tell him how grateful I was for all he had done for me and taught me. To tell him at least one more time that I loved him. I never got that chance. I found out he died living alone and in poverty. The conditions he was living in the last years of his life horrified me, riddled me with guilt. Anyways, back to my natural father. I had called and sent letters with no response. After almost 6 months of not hearing from him, not knowing if he'd died or if I'd done something wrong he sent me a letter that said he couldn't be in contact with me because he was on vacation. A few months more of not hearing from him and I get another letter claiming he had high cholesterol and the only way for him to get the numbers down was if he cut me out of his life. I would have been OK if he decided not to be in my life and was honest about the reason, but him feeding me a line of bull shit made the whole situation hurt much more than it needed to. A few days ago, approximately a year and a half after he severed our relationship he sent me a fathers day card and in it he was honest about his reasoning. Reading that letter helped me heal a lot. He told me the truth, and that was what I needed to be able to find closure. I'm so grateful for his honesty. You might be asking what the heck that has to do with fitness and me getting back to an ideal body weight? I hold everything in, refusing to allow myself to feel. When the emotions become too overwhelming to hide from I numb the pain with food. I'm hoping now that I've found closure with my natural father I'll be able to start eating to live rather than living to eat.
Just in case your wondering, I don't regret having had the parents I did. The things I went through, the abuse and piss poor parenting I had was the catalyst that made me into the family man I am today. I'm a darn good Dad and a grateful husband. If it wasn't for what I had gone through as a kid I wouldn't fully appreciate the healthy relationship I have with my wife and the joy I find in my kids. It's as if I'm reliving the childhood through my family I wish I had experienced. Life is wonderful, I'm happier than I ever dreamed I could be.
Posted by Podium quest at 12:01 AM No comments: Links to this post

To be able to stay active, eating healthy, and motivated I need to feel like I'm an athlete. Since I retired from multisport I feel like I've been a lazy fat bum. I didn't have an athletic goal to keep me dedicated. Since I wasn't motivated by any particular goal I have been eating like crap and not working out. I missed 3 weeks of CrossFit. I'm back up to 250 pounds. Damn it! This weekend my prayers were answered and I have found a goal that motivates me. My goal is to continue to build overall fitness and losing weight by doing CrossFit 5 days a week while working out on my own to get a 350 pound squat, a 275 pound bench press, and a body weight of 219 by my birthday on November 18th. My body builds strength fairly easily so I should be able to reach this goal somewhat easily, especially with the strength training plan BJ, the owner of Zia CrossFit, has designed for me. I'm excited to be back into athlete mode once again.
Posted by Podium quest at 4:09 PM No comments: Links to this post

to race or not to race

I've spent a lot of time thinking weather or not I want to get back to hard core triathlon training. I assumed training for and racing at the duathlon national championships would give me the motivation I needed, it hasn't. I really have no desire what so ever to train for endurance athletics, I don't even enjoy racing anymore to be honest.  I might race an occasional local race for fun, but that's it. I'm retiring from competitive multisport. I'm going to focus on CrossFit for awhile. I really enjoy CrossFit. The workouts, environment, and people are awesome. The owners of Zia CrossFit have even taken the time to help me with my diet and a training plan to accomplish my goal of beating my natural fathers bench press PR. The only negative about CF I can think of is my fault. I need to fix my form on dead lifts. Every time I do them my lower back hurts for weeks. I did a max dead lift yesterday and I can barely stand up straight today.
Posted by Podium quest at 5:05 PM 1 comment: Links to this post